January weekends were quite busy so I only had the time today to finally post the first half of our Ise-Shima day trip! Here you go…

Last day trip outside Osaka before we head back to MNL. Our destination is Ise-Shima, mainly because I want to go to Ise Jingu which is dedicated to the sun goddess, Amaterasu. Hence, it is considered as the holiest Shinto shrine in Japan. I read before that locals wish to visit this place at least once before they die.

I bought our train tickets back in Manila by going to the English website of Kintetsu Japan. Got our Limited Express train ticket for ¥2,640 (2 pax) so we had an early train to catch for this day. The trip was about an hour.

Upon arriving at Ujiyamada Station, we looked for a bus that would take us to GEKU (OUTER SHRINE) of Ise Jingu. It is relatively smaller than Naiku (inner shrine) but nonetheless, a tranquil and breathtaking place. Geku is dedicated to Toyouke Omikami, deity of three essentials of human life: cloth, food and shelter”. 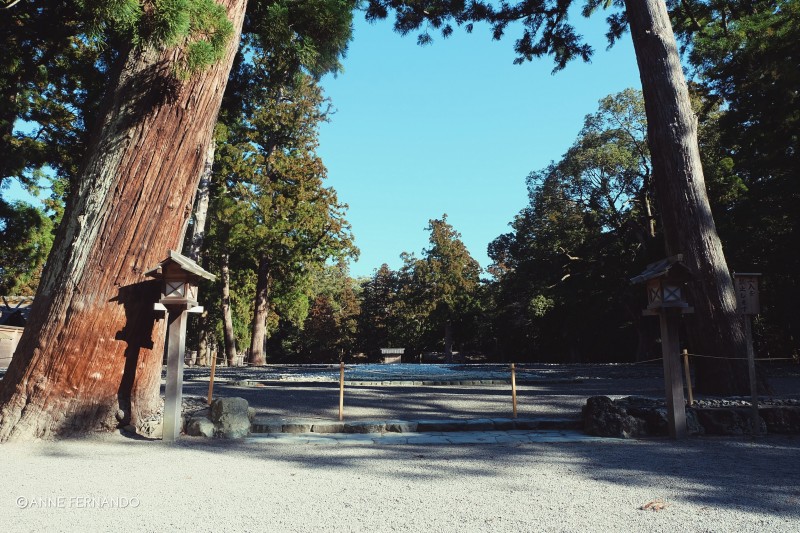 Further exploring Geku, I saw a couple going up these stairs and eventually found myself in front of a small shrine. Paid respect before leaving for Naiku…

From Geku, we rode a bus that would take us to Naiku. They said that another option is to walk but that would be too long and it us usually done for pilgrims.

Upon reaching NAIKU (INNER SHRINE), we were greeted by this first torii framing Ujibashi bridge.

From the bridge, it was quite a long walk before we reach the area to do temizu. Notice how people only walk along the side and not stepping on the center area. If I remember correctly what our Tokyo tour guide said, this is because the center aisle can only be walked by their deities. It was easy to spot tourists because some kept on walking on the center part.

Here by the riverbed of the Isuzugawa, you can directly soak your hands in the water and rinse your mouth. Temizu is a must whenever entering shrines and temples as it is said that the gods loathe impurity; hence, the need to cleanse the mind and body through this method.

A little bit of walk from here and I saw the prayer hall, where I bought two types of omamori (Japanese amulet that provides luck or protection) for myself and one for our home. 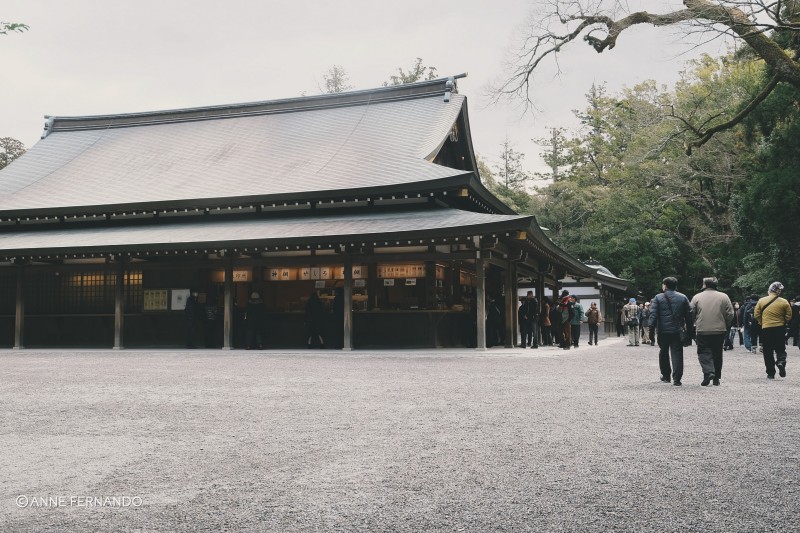 Naiku is definitely bigger than Geku and the place does not feel like the usual shrine. Think of Meiji Jingu but a lot bigger and with longer walks from one spot to another. I definitely enjoyed walking slowly and taking in the sights here.

We finally reached the Shogu, the main palace. This is the area dedicated to Amaterasu-Omikami, Shinto’s most venerated deity, and her sacred mirror is believed to be enshrined inside. Most people are not allowed to enter here but donors and bigtime people are given special exemptions. Locals still pay their respect by bowing and praying.

After retracing our steps back to the entrance, we walked a bit more and reached OKAGE YOKOCHO. I read that this is part of Oharaimachi, the traditional approach to Naiku. The place is a recreation of how towns looked like from Edo to Meiji period.

An interesting thing here is “tabearuki” (食べ歩き), which means that food/local delicacies can be eaten while walking around the area. This is a big deal because in Japan, eating while walking is considered taboo and disrespectful.

We also passed by this shop which had a long line so we decided to join and see what the fuss is about. Apparently, they were lining up for this mochi-like product made of red beans. There was no English product callout or explanation so I am not sure what it is… But when I took a bite of it when I got home, I understood why. Not a fan of adzuki but this one did not have the overpowering bean taste plus it was not too sticky.

Some more exploration in the area and we found a shop that was selling fried chicken as street food. We bought one serving and we were blown away by the taste. I could not remember though the name of the place. 😦

We made sure that we were able to go around the whole area before we decided to get lunch… I realized that the only activity we did in Okage Yokocho was to eat. Oops! We went inside this restaurant called EBIYA (ebi means shrimp) because we were attracted by their menu outside the restaurant.

We both got the tekonezushi set meal, which included a huge piece of raw abalone. I have always been curious on how it tastes especially after seeing abalone in different Korean variety shows. Proof of its freshness was when I squeezed the lemon over it, the meat-like stuff wriggled for a long time!

Tekonezushi is also known as “fisherman’s sushi/meal” as it is believed that this originated from a meal that fishermen made while out in the sea. It is a local delicacy in Ise which consists of marinated red-meat fish (usually tuna or skipjack), vinegared rice, and garnish. In our case, we were served tuna with Japanese pickles.

Next half of our adventure in Ise-Shima is in the next post. 😊