We purchased our tickets to Osaka (KIX) via Cebu Pacific last year, and we were lucky enough to catch a seat sale (Php 7,500 for RT ticket per person).

Our flight to KIX was a bit delayed but we still arrived in KIX around 8PM (flight lasted for about 4 hours). Since we were not sure if there were any restaurants near our Kyoto Airbnb, we decided to eat in KIX before leaving. We chose SUKIYA which is popular for their gyudon but there were also a lot of other dining options in the same area. After eating, we bought ICOCA cards at the JR office then proceeded to the bus terminal for our airport limousine bus tickets to Kyoto (¥2,550 per ticket).

The trip was about 2 hours and we hopped off at Kyoto Station (JR side). I read about a Foreign Friendly Taxi in Kyoto Station (read more here)… But, we could not find the terminal for this so we opted for the regular cab. Good thing Shu, our Airbnb host, sent us a PDF file which included the Japanese address and a map screenshot of the Airbnb’s location. Our taxi driver did not have any problem finding it.

While we did not meet Shu, he was really accommodating of our requests. He helped us book a reservation in Yakitori Hitomi and even allowed us to store our luggage beyond check-out time. We highly recommend staying in Shu’s Airbnb: 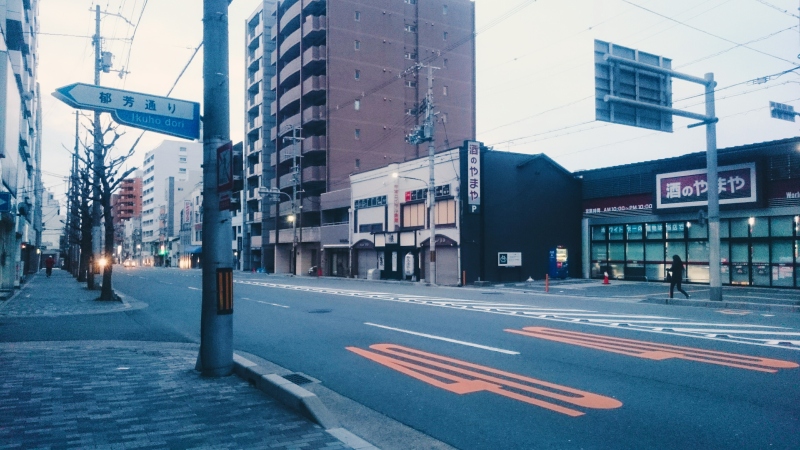 On our first day of tour, we left early for Kiyomizu-dera to avoid the big crowd. We hopped off at Gojo-zaka bus station and it was still a long walk before reaching the majestic gate to KIYOMIZU-DERA (UNESCO). There were no visitors yet when we reached the place, and it was a wondrous feeling to take in all the calmness and serenity. 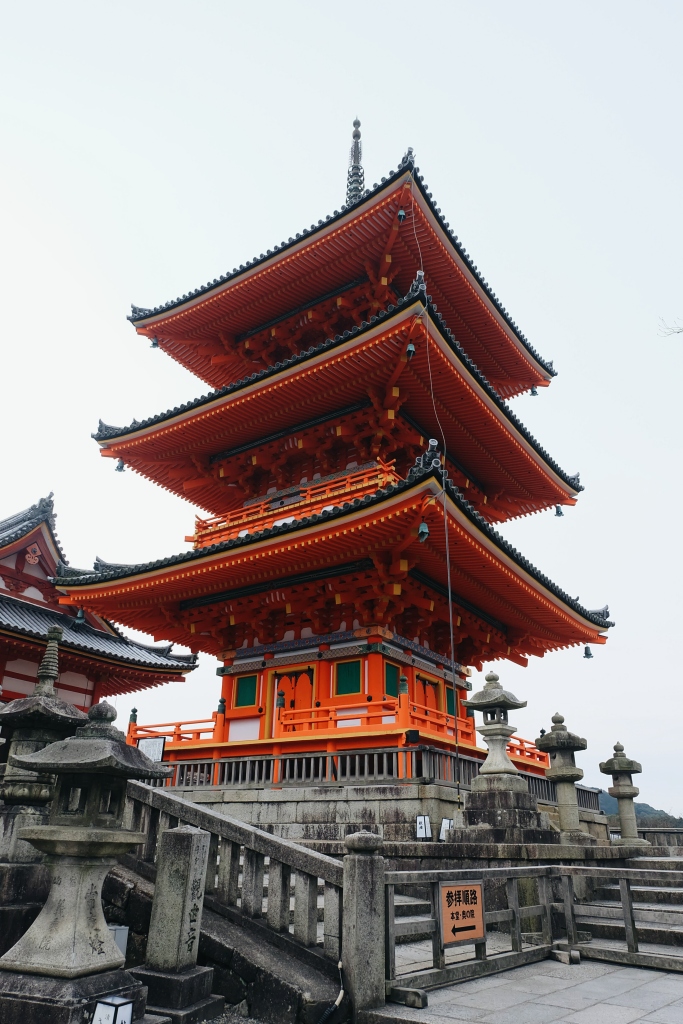 Kiyomizu-dera is best known for its wooden terrace where people can have a good view of the surrounding trees and of Kyoto. Unfortunately, the roof of the main hall is currently undergoing renovation so it is difficult to get a good view. 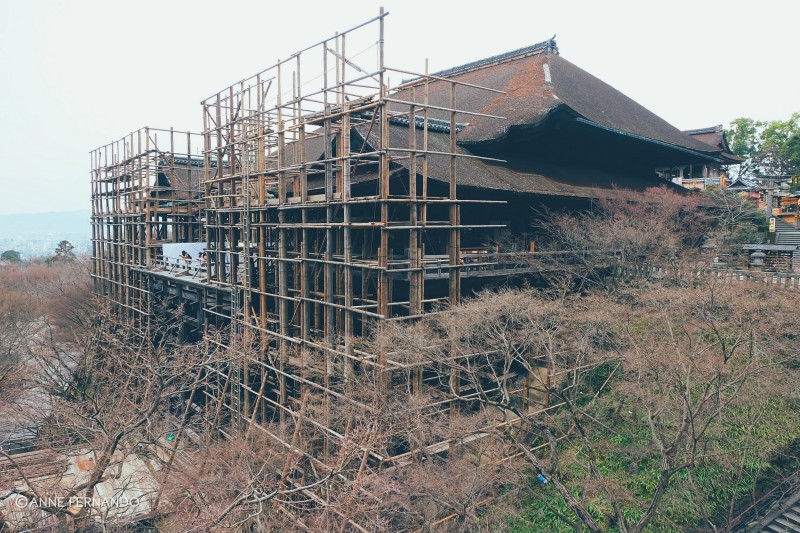 A little bit of walk and we saw the gate to JISHU-JINJA, a shrine dedicated for love and matchmaking. They also sell different types of enmusubi omamori – for single people who are looking for love, stronger relationship, good marriage, etc. 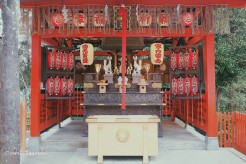 The shrine is also popular for two stones called “love fortune telling”. Stones are placed a few meters apart and you have to walk from one stone to the other with your eyes closed. If successful, your love-related wish will come true. If not, it is said that it will take a long time before it is fulfilled.

Another highlight was the OTOWA WATERFALL – water streams divided into three. We got a long pole with cup to get and drink water from the streams. But, it is advised not to drink from all three because this is considered to be greedy. Each stream provides a benefit and facing from inside the falls, from left to right, the benefits are: academic achievement, success in love, and longevity. 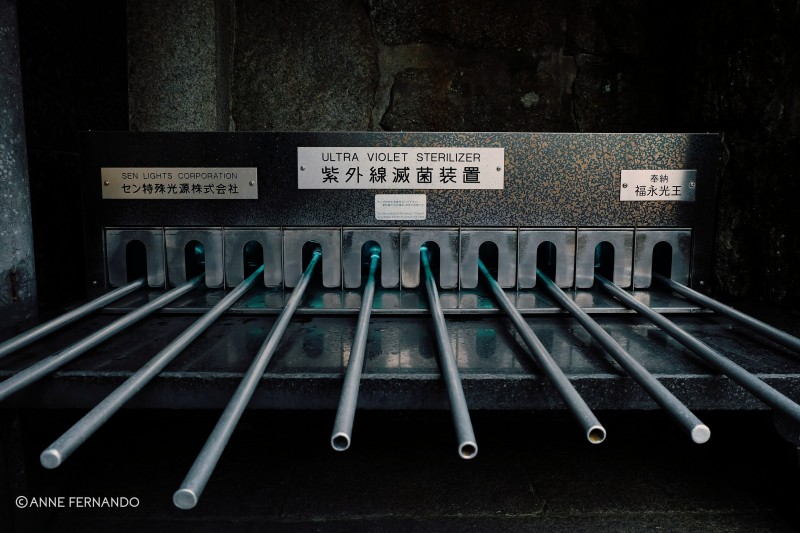 We headed out of Kiyomizu-dera to explore SANNENZAKA and NINENZAKA. Both streets are lined with traditional-looking establishments, which made us feel like we were walking along ancient Kyoto. I hunted the following stores based on research prior to the trip: Yatsuhashi Cream Puff (matcha cream puff), Malebranche (okoicha langue de chat, cha no ka), and Shichimiya Hompo (shichimi and yuzu powder).

We also passed by a small shop selling strawberries and I knew that I had to buy one… Best decision ever as the strawberries were really sweet!!!

While the walk along Sannenzaka and Ninenzaka took some time, we did not mind because of the quaint vibe. As we went farther away from Kiyomizu-dera, the crowd got thinner so the walk became more pleasant for us. 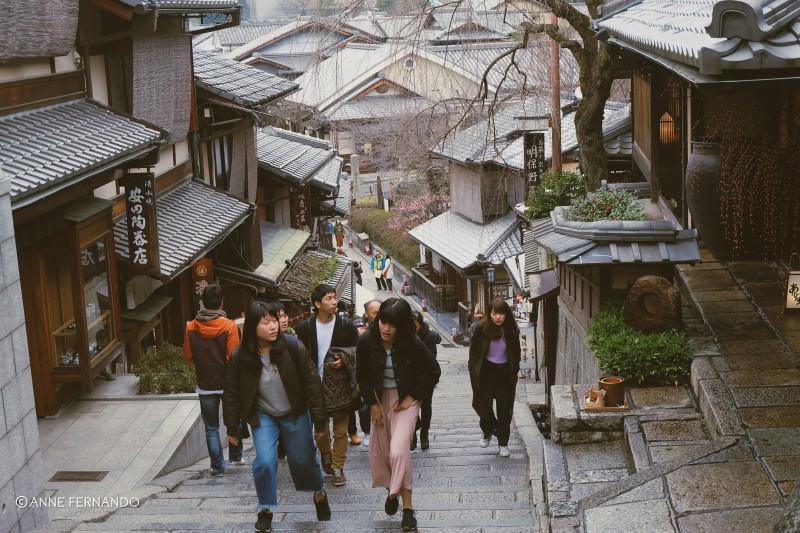 We were supposed to eat lunch in Izuju Sushi, one of the oldest traditional sushi restaurants in Kyoto, but we were surprised to find out it was closed. There was a nearby restaurant with a long line outside so we opted to join the bandwagon. They say that when locals line up for it, the food is most likely good.

While HACHIDAIME GIHEI has 2 floors, the area per floor is just small. We waited for about an hour and a half before being ushered inside, and it was quite cold outside! I ordered Oyakodon set and added Miyama Komoriuta (free range egg brand) to make a tamago kake gohan – fresh egg placed on top of rice which is very popular in Japan. 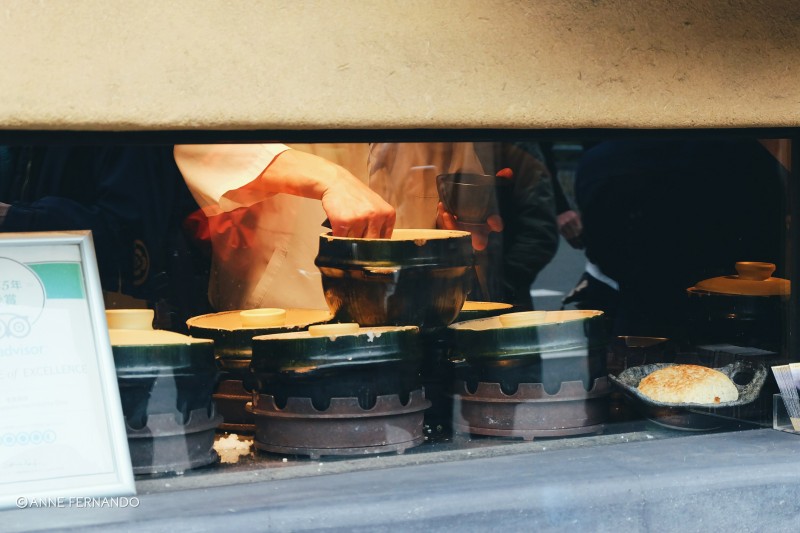 I honestly did not get what the fuss was about although I read reviews that rice was the highlight for this place. The waiting time we spent felt like a waste for me especially since the oyakodon tasted average.

A few meters away from the restaurant, we saw YASAKA-JINJA which was next in our itinerary. Upon entering the gate, there were a lot of food and souvenir stalls. Since we still had some space in our tummies, we bought takoyaki, caramelized fruits, and a big kani stick. 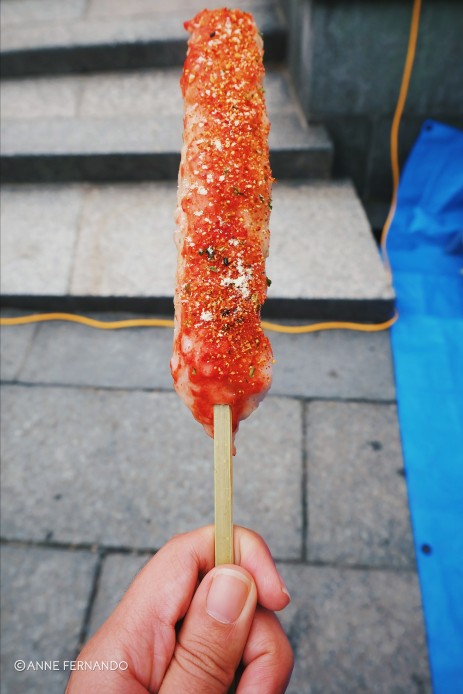 Jumbo kani on a stick 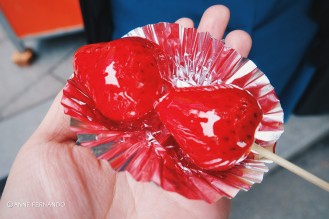 Entrance is free and one of the key highlights in this shrine is the dance stage, which has hundreds of lanterns that are said to be lit during the evening. This place is also known as Gion Shrine and very popular for Gion Matsuri, a summer festival held every July.

We were supposed to get an omikuji but we were told that there is no English translation available. I noticed that there were two kinds of omikuji in this shrine – one for general fortune telling, one specifically for love. I was interested in the latter because I already had the chance to get the general omikuji last year in Meiji-jingu.

From Yasaka-jinja, we walked to MARUYAMA-KOEN which was just a few minutes away. The park is very popular during sakura season, especially because of its iconic shidarezakura (weeping cherry tree). Unfortunately, since we were there around early March, it had no flowers yet.

We still enjoyed the place though since there were different corners to explore. We also had the opportunity to see some ikebana displays there. 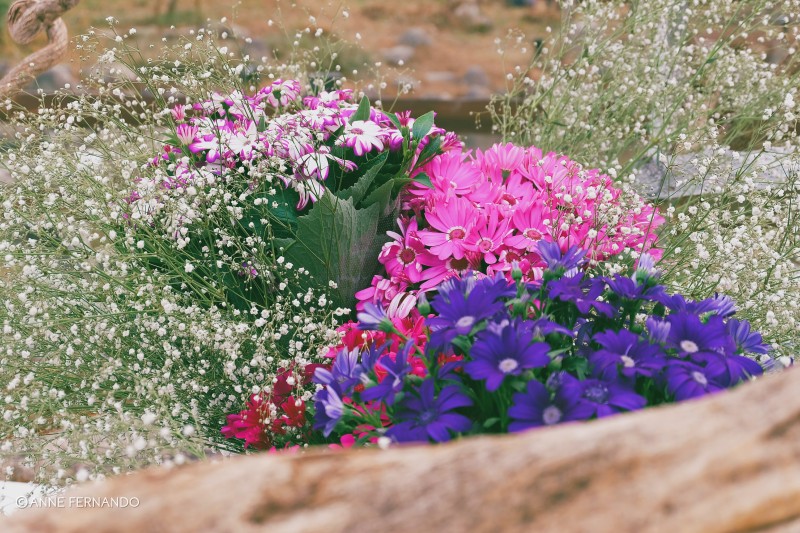 Our next stop was CHION-IN, where access to temple ground is free but Hojo and Yuzen gardens require a fee. The Sanmon Gate, which serves as the main entrance, is considered to be the largest wooden gate in Japan.

There are two ways to get to the temple ground – climb steps or ride a shuttle for free. We went for the latter option since we were quite tired already from walking since morning. There were different halls when we arrived but Miedo Hall, the main hall, is closed for renovations until 2019. 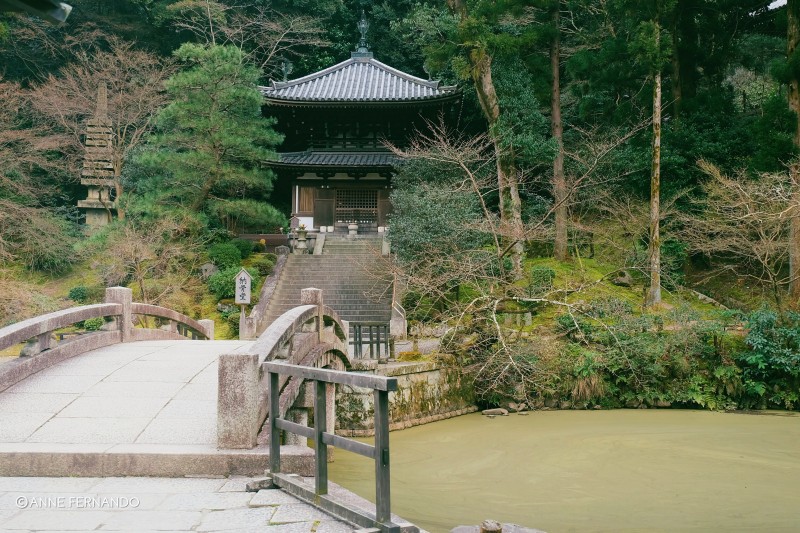 Our last stop before dinner was SHOREN-IN, which can be walked from Chion-in. When we reached the area with the payment booth, we decided not to enter for reasons I cannot remember anymore. I’d still recommend the place though because I read that they have kachoden (drawing room with fusuma-e – screen paintings). Additionally, they also have a garden with carp pond which one can admire while sitting on the tatami mats.

After our short stop in Shoren-in, we hopped on a bus going to the dinner place. When we got off, J said that she saw a blossom tree near the river so we hunted for it. True enough, there was one tree which was in full bloom but this turned out to be ume (plum blossom), not sakura. Nevertheless, the flowers were really pretty. 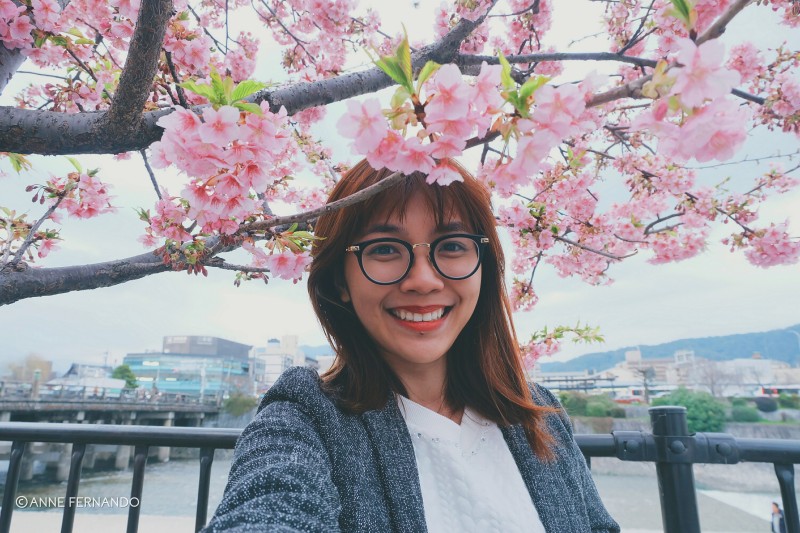 We walked to Kichi Kichi afterwards since we had a reservation and we needed to be on time. KICHI KICHI is famous for its fluffy omurice made by Chef Yukimura Motokichi.

Each of us ordered the half-size omurice since the full size was too big for us. The omelet was indeed fluffy and I liked how the sauce was not too sweet. Overall, it was delicious but I wouldn’t jump into concluding that this is the best out there.

We also ordered Chicken and Cheese Cutlet with Mustard Flavor, which was another good call!

Chef Motokichi really knows how to entertain his customers, and his staff are efficient and friendly. I highly recommend placing a reservation since they can only rarely accommodate walk-in customers.

After our delicious dinner, we went back to Higashiyama area for the HIGASHIYAMA HANATOURO, an annual spring illumination the said district. Popular temples, shrines, and gardens are open in the evening. Shops also extend their working hours to cater to the huge crowd that attend the event.

We were supposed to visit all the temples we went to during this day but we had no more energy. We went back to Kiyomizu-dera and headed to KODAI-JI, which had a colorful lights show in the rock garden. The raked gravel in the garden is said to represent the vast ocean. 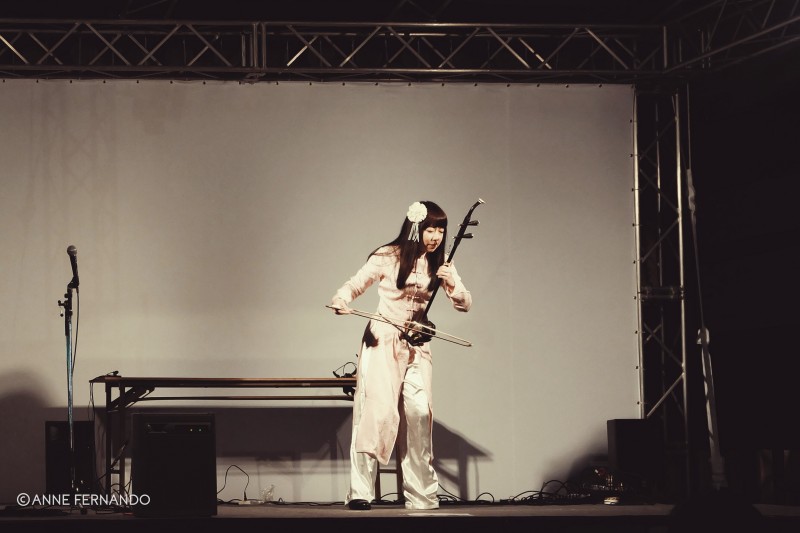 We were too tired to commute going back home so we decided to take the taxi (an affordable option if you are 3-4 in a group). Not surprised to find out that we reached almost 30,000 steps from all the walking we did for more than 12 hours. Not bad for our first full day in Kyoto?