A week ago, we set April 6 as the day my family and I would go to Enchanted Kingdom (EK). But, before going to EK, my uncle had to attend to a few business matters which included a project in Tagaytay.

We arrived at Tagaytay at around 1PM and we haven’t eaten lunch yet. My cousin suggested eating at Pamana Restaurant which is one of the famous food spots in Tagaytay. Pamana Restaurant is owned by Happy Ongpauco, cousin of celebrity Heart Evangelista.

I love the interior of the place because it gives a homey feel. There are lots of Ongpauco family pictures, antique furniture, and quaint pieces of home accessories (e.g. rocking chair, fireplace) inside.

We decided to seat ourselves at the second floor. I don’t know if sitting inside was the better choice. It was VERY hot that day and we only had one electric fan to keep us cool inside. I did not notice any signs of the wind blowing outside so there was a possibility of sitting outside as a not-so-good idea, too.

On to the food we ate at Pamana! By the way, I was too hungry to take note of the names of the dishes we ordered and their corresponding prices since I did not eat breakfast that day. I did my best to search for a menu online but there was none. 😦

The bowl of Bulalo was really big so imagine this bone sticking out of the bowl… I thought that this was probably from a dinosaur. Kidding! We asked for extra soup and the waiter was kind enough to grant our request. Pamana’s Bulalo had a meaty flavor and the meat itself was very soft to chew. I was just a tiny bit disappointed with the soup because it was not very hot. But of course, that is already a personal preference.

Since the start of 2013, I have been on a low-carb diet and one of the things I did was to substitute whole-wheat bread for rice. The only “rice” I cannot refuse to eat are my mom’s fried rice, bagoong rice, and aligue rice. So, when I saw that Pamana has Bagoong Rice, I knew that I had to order it. Pamana’s Bagoong Rice (good for 2 to 3 servings) has scrambled egg, binagoongang pork, and green mango strips for toppings. It’s actually a meal on its own already. I enjoyed stuffing my tummy with this that I did not bother getting a big portion from the other dishes.

The aligue in Davao’s Baked Sugpo sa Taba ng Talangka went well with the cheese. This combination complimented the sugpo (large shrimp) well. I only got a piece of this since this dish was for my cousin who cannot eat pork, chicken, and beef due to fasting.

This was the only dish I was not able to taste but seeing the rest of my family get second helpings of this dish means that this was delicious enough for them.

The squid was not overcooked so it was easy to chew. It tastes good but it was not too outstanding for me.

Dun-dun-dun!!! The highlight of our lunch goes to the Crispy Pata (deep-fried pork leg). I saw my little sister get a huge chunk of the skin. Huli! I tried a small piece of the skin and it was really crispy. I also grabbed some meat which was easy to munch. Pamana brought out the savory and meaty flavor that I want with crispy pata. 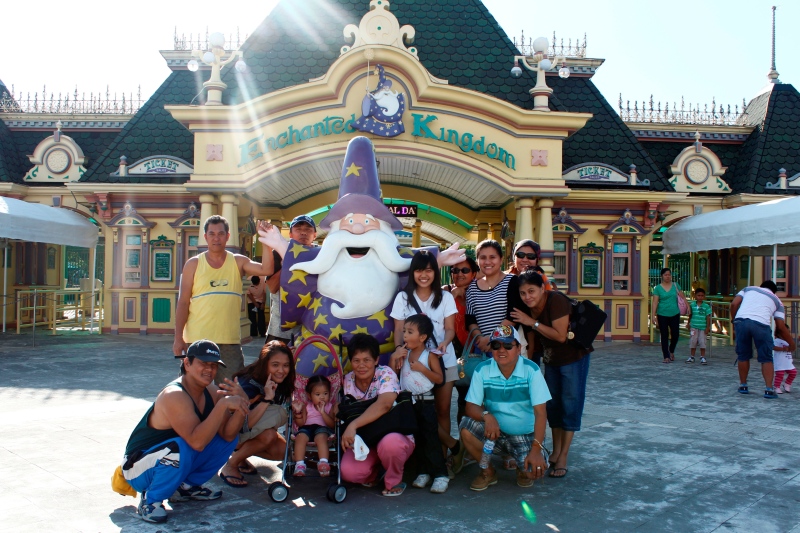 After our business with Tagaytay, we headed towards Laguna. Enchanted Kingdom!!! The last time I went here was around eight years ago, during my high school field trip. It was no surprise that there were a lot of people last Saturday since it was a weekend and students are now on their summer vacation.

My little sister and I were able to use our student IDs to avail of EK’s discount (ticket = P450/student). The regular rate for adults is P500 for weekdays while P600 for weekends. We were disappointed to know that EK removed the ticket rate for adults who wish to enter EK but do not have any intention of riding any of the amusement park’s attraction. My aunts and uncles had to pay P600, too. 😦

The first attraction we went to was the Grand Carousel. We felt like kids again even though my little sister and I are already in our 20s. Obviously, we were surrounded by kids but who cares. My parents also rode the cute horsies. Kids at heart!

The three of us decided to separate from our group so that we could ride any attraction we wanted. My parents, aunts, and uncles went with my nephew and niece to see what attractions these two kids could ride.

Dodgem!!! It was my first time to drive a bump car. I was a bit nervous since while I was waiting for our turn, I saw a few people who were stuck at the sides and could not move their cars. My cousin told me to just keep on turning the steering wheel until my car moved. I was glad that I did not get stuck and I was able to drive my car. *happy dance*

Roller Skater is the roller coaster for kids and for adults who cannot ride the Space Shuttle (like me!!!). I was shocked with this attraction because we only went around the track once. Hindi man lang nag-init pag-upo namin. I know that the last time I rode this was eight years ago but back then, we went around the track two or three times. Now that would make the ride more worth it, right?

We were not able to ride this because of the loooooooong line plus my relatives wanted to go home already when we decided to fall in line. 😦

Hello to the random people in those pictures. LOL. During our ride, Ate Sandy, Chippy, and I talked about how we should smile (or at least try to) when we reach the last downhill part of the attraction. There was a camera at that portion of the ride and you can opt to have it printed on a photo paper or tumbler. Jungle Log Jam was still fun to ride but we were frustrated when we saw our picture. It was too dark! It was already past 5PM but I think that is not a valid excuse. They should have activated the camera flash at that point.

At around 6PM, our group met with the rest of the family since we planned to ride . When we arrived at the attraction, the line was the longest I had seen that day. It extended even outside the attraction. We decided not to ride this anymore and headed to Rialto instead so that my nephew could watch a 3D clip. 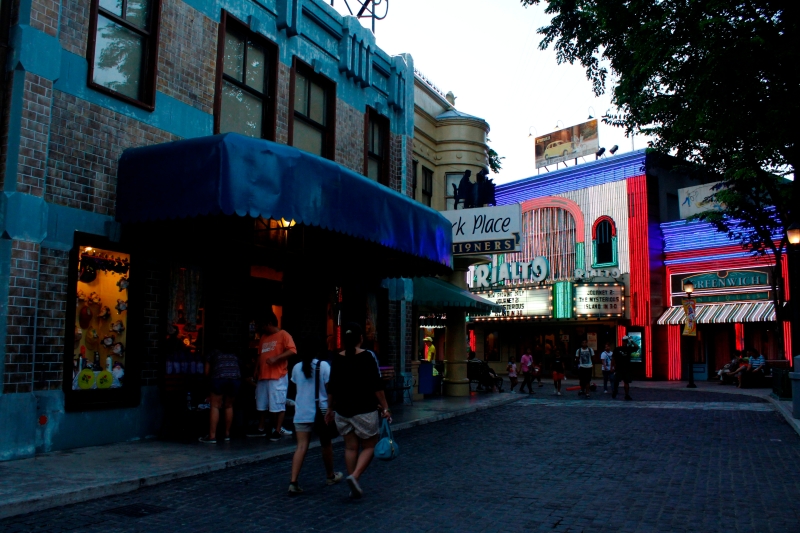 Talk about another disappointing attraction. The movie clip EK showed was from Journey 2: The Mysterious Island, specifically the part where Dwayne Johnson and his gang were riding bees and were being chased by abnormally huge birds. I haven’t watch the film but I did not like the movie clip. I would have preferred cartoons or animation films over it. Well of course our seats moved forward, backward, and sideways to let us feel as if we were also part of the film but no, it just didn’t work.

I love amusement parks at night because the place becomes more magical with the colorful lights. Anyway, meet Flying Fiesta, one of my favorite rides in EK. This attraction is located just right in front of Rio Grande. Whilst the line for Rio Grande was looooooooooong, there was none at Flying Fiesta. Hooray! If we had more time, I would have ridden this three or four more times.

Our last ride was the newest attraction in EK, the Disk-O-Magic. I convinced my cousin to ride with me and my little sister since I thought that this attraction was fun. Not much screaming as compared to EKstreme Tower… or so I thought. When it was our turn to ride, one of the staff asked us to leave or bags at one corner. No seat belts for this ride but there is a cushion for the back, which magically pops out from the bottom of your seat.

So what happened to us during our ride? Screaming and screaming and screaming. The first three seconds were still fun. All of us were clapping our hands to the beat of the EK music but after that… Damn. We were spinning then we were going from one end of the ride to another. I thought I would be thrown out of the ride any moment (but I knew that I was safely tucked in my seat). At one point of the ride, I just had to close my eyes because I could not scream anymore. After the ride, my hair was all over my face. But, I swear this was really the BEST ride I had that day. I made a GIF of Disk-O-Magic to show how the ride works: click HERE!!!

After Disk-O-Magic, we left Enchanted Kingdom and went home. It was a tiring day but the happiness I felt that day made me forget how tired I was .Weekends are really the best when spent with the people you love the most. ❤